The church, where a liturgy in Bulgarian was celebrated firstly 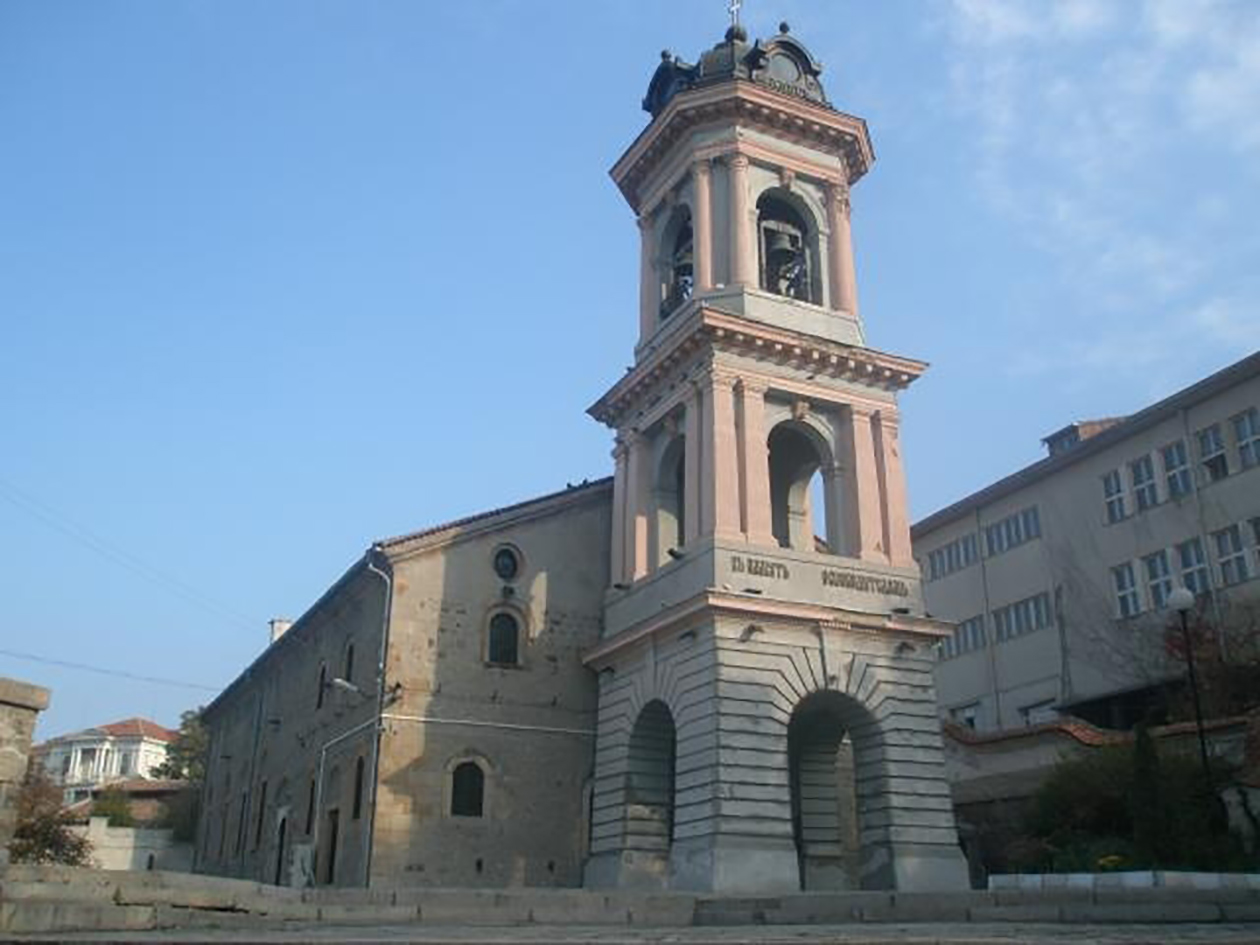 In Plovdiv, according to documents preserved to this day, there was a beautiful and majestic church between the two hills Dzhambaz Tepe and Taksim Tepe in the Middle Ages. At this place now rises the cathedral of Plovdiv, which is dedicated to the Virgin. The first information preserved about it dates from the ІХ – Х century. Nikita Honiat, a prominent Byzantine intellectual, writer and governor of the Plovdiv region, described this church as follows: “with its magnificence and majesty it arouses astonishment and wonder in everyone who visits it.” During the last restoration related to the renovation of the temple, a tombstone was found under the altar with the inscription of the first donor - the noble Byzantine Amyant.

In 1189, the Crusaders of the Third Crusade invaded the city and Philippopolis and its beautiful temple were looted. After these events, the church was rebuilt as a cathedral, and a monastery appeared around it, and so the place became a spiritual center. After the conquest of the city in 1371, the monastery near the church was completely destroyed.

During the Revival era, there was no trace of the ancient and majestic church. During the period from 1844 to 1845, masters from Bratsigovo erected a new and large temple, built entirely of stone. It was a three-aisled pseudo-basilica with impressive dimensions. Initially, its ktitor was Valko Teodorovich Chalakov (the Great) from 1825 to 1841, when he died, and then he was replaced by his brother Stoyan Todorovich Chalakov. It was under him that the beautiful church was built. Stoyan Chalakov, thanks to his influence before the sultan, managed to obtain a firman for its construction. An inscription in Bulgarian, which testifies that the construction of the church began on April 26, 1844 and most likely ended in 1845, is carved on the north door of the church on a small marble tile, built in a marble frame of the door. It is assumed that the consecration took place in the same year, 1845, under Metropolitan Nicephorus on the temple feast, or later in the same year on another feast of the Mother of God.

During the church-people's struggles for independence the St. Mary church played an extremely important role. On December 25, 1859, on the day of the Nativity of Christ, the then Metropolitan of Plovdiv Paisii together with priest Zlatan, chairman of the church, celebrated a solemn Holy Liturgy, for the first time in Bulgarian. This was the first great achievement of the Bulgarians from Plovdiv in the struggle for church independence. In 1870 a sultan's firman was issued for the establishment of the Bulgarian Exarchate, with which the High Gate officially recognized the autonomy of the Bulgarian Church, and hence of the Bulgarian nation. In 1872, in the city of Plovdiv, Panaret, the first Plovdiv Exarchate Metropolitan was welcomed in the cathedral. Thus, until 1906 there were two dioceses in the city - Greek, at the old metropolitan church of St. Marina, and Bulgarian - at the church of St. Mary.

After the Russo-Turkish War of Liberation and the Liberation of Bulgaria from Turkish slavery, a bell tower was built near the church - in 1881, as such was missing until then, and the church bells were hung on a tree in the churchyard. The new bell tower was built according to a design by the Czech engineer and architect Josef Schnitter. It was made above the western entrance of the cathedral, in the style of Russian classicism. It has been preserved in this form to this day. In essence, it is a large three-story tower placed on four pillars connected by large arches, a dome of the bell tower and four bells. They were the work of Lazar Veleganov from Bansko, who when he moved to Plovdiv built a foundry and cast bells.

The church measures 32 m by 17 m and is a three-nave basilica, the main part of which is divided into three naves by two rows of columns (twelve in number), ending with magnificent capitals in the Baroque style and connected to each other by arches. Due to the existing restrictions on Christian temples during its construction, it doesn’t have a dome. The iconostasis measuring 14.30 x 3.75 m was probably made by the master carvers Dimitar and Anton Stanishev in the Empire style, with few but large carved ornaments attached to the wooden base. The carving is dominated by plant motifs - roses, grapes, leaves, daisies, wreaths of oak twigs.

In 1952-1953, on the initiative and with the blessing of Kiril, the Metropolitan of Plovdiv of that time, later Patriarch of Bulgaria, the Church of the Holy Mother of God was painted by Professors Nikola Kozhuharov, Dimitar Gudzhenov and Vasil Zahariev. Other prominent Plovdiv residents, such as Zlatyu Boyadzhiev and Dimitar Kumanov, also worked with them. Thanks to their joint activities, the church was painted with the faces of prominent Bulgarian figures who contributed to the church's independence, such as Metropolitan Methodius Kusev, Nathaniel of Plovdiv, Ilarion Lovchanski, Panaret of Plovdiv, Paisii of Plovdiv, Exarch Antim I, Exarch Joseph, Avksentiy Veleshki, Ilarion Makariopolski and the patriotic Bulgarians - Dragan Tsankov, Stefan Bogoridi, Gavrail Krastevich, P. R. Slaveykov, Todor Burmov, Yoakim Gruev and others, who together with the clergy also dedicated their lives to the independence of the Bulgarian church.

In honor of the 2000th anniversary of the birth of Christ, the temple was completely restored and renovated. Hristo Danov, Yoakim Gruev, Stoyan Chalakov, the Plovdiv metropolitans Panaret, Nathanael, Maxim, Varlaam, Arseniy, Bishop Neofit Branitsky and Russian officers who fell for the liberation of Plovdiv in 1878 are buried in the churchyard.

It is located at the entrance to Old Plovdiv and is one of the most photographed churches in the city under the hills. It is preferred for performing various rituals, and the yard - even for relaxation after long walks on the cobblestones.