For the second time at Baba Yaga, the Slav Party is back! Wear your old tracksuit and join them for a memorable night! Rakia will flow in your veins, beer will flow in your arteries and Balkan Music will make you dance till you sweat! Special Prize for the best attire!
[New Shots Menu only for the party!]
FREE ENTRANCE!

On Saturday, the party starts again at 8.30pm with dancing on the cobblestones, and after 11pm continues upstairs. PERIL is a creative and talented DJ with a modern look of electronic music, who will present you an up-to-date selection, which is a guarantee for the mood throughout the night!

After Hila split by the sea earlier this month with his hits, it's time to return to Plovdiv. The bar is waiting for you this Friday for a crazy party to celebrate the last day of July until the early hours of August.

Nesh & Antonio B. at BALLY CLUB and Aperol Spritz with Guest Bartender

For the Saturday street party, in addition to great music from Aperol Spritz, they have prepared amazing cocktails and promotions.

Bally Club is the place where you can recharge, in the company of good friends with soft drinks and fresh music every weekend. On August 1, their guests will be - Nesh DJ and Antonio B. They are young, creative and talented DJs with a modern view of electronic music, open to the world, who will present us the current selection, which is a guarantee of mood throughout the night!

Chaplin is based on the real-life story of Charlie Chaplin, the iconic film actor, writer, producer and director. The new musical spans the comic’s entire career, from Chaplin’s first performance as a child in 19th-century London to his tearful acceptance of an honorary Academy Award in 1972. The show documents the
beloved actor’s rise to fame and the people who shaped his life, including his mother Hannah, his older brother Sydney, his fourth wife Oona O’Neill and gossip columnist Hedda Hopper. The musical dramatizes the making of Chaplin’s legendary films,
including The Kid, The Circus, Modern Times and The Great Dictator as well as his turbulent childhood, frenzied love life and political beliefs. Featuring an original score by Christopher Curtis, including “Look at All the People,” “Just Another Day in Hollywood” and “This Man,” Chaplin tells the touching story of the man who makes the world laugh as his legendary screen persona, the Tramp, but struggles to find
happiness in his own life.

In the schedule for the evening, in addition to stories from the lands of what does not leave us alone, we will see the band’s concert from Bee Bop Cafe, which took place on 29.02.2020, as well as the documentary  movie "Dobrina".

The band is proud of the concert, as with very few things so far. It is rare to meet skilled people behind and in front of the stage. The documentary is something special for them. Completely immersed in the days of the recording of "Success", it shows what it's like to live with people for whom creating a set of sounds is not a matter of choice.

The entrance for this dimension will be BGN 6 and will be paid only on the spot. 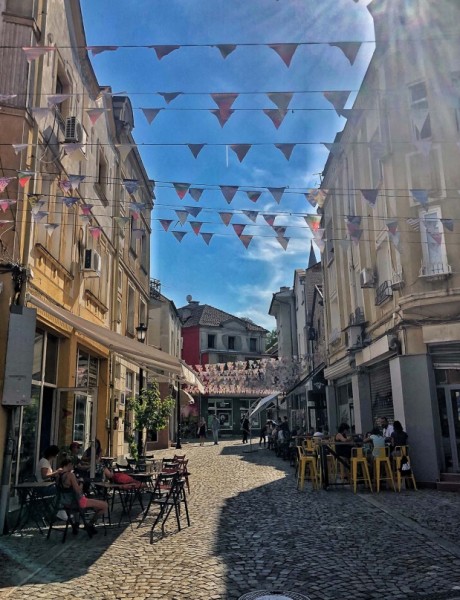