The Ancient Roman Stadium of Plovdiv

It was built at the beginning of the II century, during the reign of Emperor Hadrian. It's length is 240meters and, so far, has exposed its northern end, while the rest is under the main street of Plovdiv The Ancient Roman Stadium of Plovdiv is located at Dzhumaya Square and divides the main street of the city in two. It was built at the beginning of the II century, during the reign of Emperor Hadrian. It's length is 240meters and, so far, has exposed its northern end, while the rest is under the main street of Plovdiv.

In the past, there were held gladiator fights, sporting events and the famous Alexandrian and Pythian games. Ancient Greek games began as a purely religious affair. They were dedicated to certain gods. In Roman times, however, games turned into pure entertainment and every respectable city in the empire invested in a stadium and even in a hippodrome for chariot racing and an amphitheater for gladiator games.At the end of IV century, the Olympics were hailed as pagan and banned by Emperor Theodosius I. The sfendona has 14 rows of monolithic marble seats and the entrance bellow leads to the underground passage-street. There are several corridors, one is under the sfendona (the seats) and is a pass-street with syenite pavement, below which it is built drainage channel. There are hypotheses that this was the beginning of the street, surrounding the fortified wall of the inner side.

It is one of many preserved buildings from the time of Ancient Rome in Plovdiv. The Ancient Stadium of Philippopolis is one of the most remarkable facilities of the ancient Philippopolis. It was declared a national cultural heritage site in 1995. 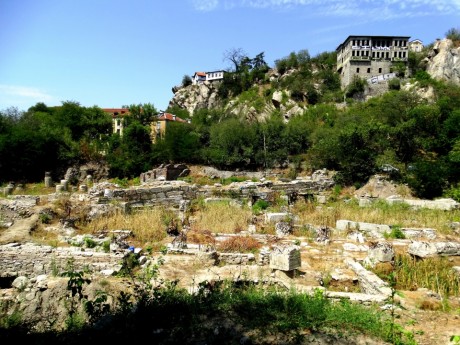